So depression sucks. Massively. It’s been all over the media for some time now about discussing the elephant in the room. And that’s cool. I get it. People struggle on their own and thing’s go from bad to worse. But what about the people who don’t struggle on their own? I have an amazing family. An amazing boyfriend. Friends. Work place. Home. I am not hard done by financially in fact I have a pretty incredible lifestyle. This week I went to the doctors after having a bit of a melt down. I am back on my anti-depressants. Yes it’s shit. No it isn’t what I want. I lasted a month off them and I, along with everyone else, thought I was doing pretty well. Funny how the bastard just sneaks up on you and gets you right when you think you’re totally fine. 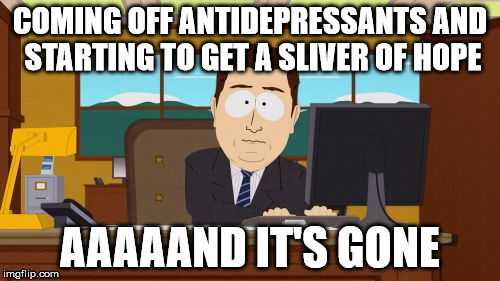 The hardest part, for me, is that my depression (I feel like putting it in quotation marks) isn’t remotely what I expected depression to be like. I don’t sit at home crying. I don’t mope. I’m not “depressed” (there we go!). Mine takes it time. It makes me feel irritable, short tempered, aggressive, emotional. It is like a pendulum swinging between wanting to put my fist through a wall to bursting into tears at my desk on Tuesday morning when someone asked if I was OK (I was unusually quiet). I mean what is that? How is that depression? What a stupid word. It should really just be called… I dunno…. Confusion. 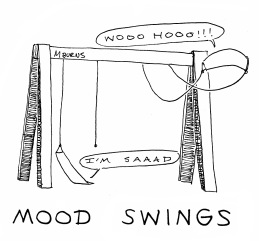 It took me a long time to realise my mental health probably wasn’t squeaky clean. For years we had the eating disorders, the mild self harm, the mood swings. Looking back it’s pretty damn obvious. Anyone who knows me or has spoken to me though knows me as loud, confident, smiley, chatty…. I’d like to think I’m the person someone comes to for chats about whatever… ‘cos you know – I can chat… a lot. I’m not socially awkward. I don’t come across as sad or depressed or quiet or any of the things people assume go hand in hand. I never really talk about it because most of the time it isn’t even on my radar.

My confusion (going with that term) doesn’t rule my life. It doesn’t break my friendships or my relationships. Well not currently at least. But it has done in the past. In summer time 2015 I had the toughest few weeks I’ve experienced. Being signed off work and not leaving the house or speaking to anyone are pretty extreme behavioural changes for me. Yoga, mindfulness, my family and a handful of amazing friends all helped. But, as much as I hate to admit it, so did medication. I remember talking to my mum about Ironman – “but I don’t want any of my emotions or feelings if I cross the finish line to be pumped up or dampened down by these shitty pills!”. Turns out…. that’s not how it works and I needn’t have worried because that finish line was better than anything … ever … in the whole world. To the best of my knowledge and the way I like to think about it…. confusion/depression is the result of a chemical imbalance in your brain. Long story short my brain lets certain chemicals flow freely but others get blocked, I can only assume these are the happy mellow chemicals. So cheers for that brain. Super helpful.

Ironman and just intense training in general had a huuuuuuuuge impact on my mental health. In fact it is probably the biggest contributor to an improvement in my emotional stability for as long as I can remember. But as a very wise person on FB of all places pointed out recently; whilst exercise releases endorphin’s and endorphin’s make us happy… sometimes it isn’t enough. What the shit is this woman on about?? 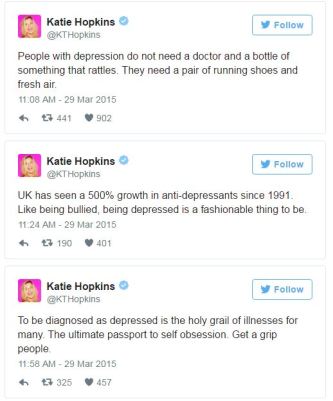 Mmmmmm good one Hopkins… Surprisingly these didn’t go down very well in the twittersphere. I get where she is coming from. Because she is clearly an egocentric moron. She has never considered other people might not be horrific clones of her and therefore she doesn’t understand. Riiiiiight… I totally get it. I actually do. I was speaking to a friend of mine last night, I won’t name her but she gets it. She gets the confusion. I actually really struggle to even put it into words. What it’s like. It isn’t as simple as feeling SAD or not wanting to leave the HOUSE. It isn’t lying on the SOFA all day. It’s a whole ton of stuff that just warps your day to day mental stability. And it fucking sucks.

Anyway, I wanted to write about this. And let anyone out there know that it’s totally cool. Yeah I did an Ironman. Yeah I am trying to be super healthy and eat vegan stuff. Yeah I sign up to do weird challenges. But it ain’t all glory. Some days are really fucking shit. Some days I sit and watch Chris (boyfriend) head out on his bike for a 5 hour training ride and I want to cry. I dunno why, but I do. I think it’s to do with being hard on myself maybe? I should be out training 24/7 or something? Whatever it is it’s a completely irrational response. The other day I dropped a plate haphazardly into the dishwasher by mistake and it made a horrid clanging noise. My reaction? I had to clench my fists, close my eyes and breathe slowly through my nose three or four times. ‘Cos that’s normal right? No it isn’t. Should have seen Chris’s face…

I guess the end story is I’m not going to sit about and say “fuck… I’m on meds… I’m ‘depressed’…. this is shit”. There is zero to be gained by that. I’m just gonna crack on. I’m currently tracking down some psych and psychiatry help to try and sort these weird emotional/mental traits long term… largely because I refuse to be on meds forever.

So – if you get where I’m coming from with any of this. Or you feel shit. Or sad. Or angry. Or stressed out of your mind because you don’t look the way you want to. Or you don’t perform the way you want to. Or just whatever. It’s cool. There are loads of other people feeling shit and sad and angry sometimes too. And let’s be honest – it always get’s better… even if it is only short term…..

I will eventually make things better long term though….

A few things that help me: