This title has me singing “Mama said knock you ooooout” by LL Cool J. Random. I watched Straight Outta Compton at the weekend. Maaaan it was good. Helps that I am a huge fan of their stuff, betcha didn’t expect that did you? Well I am, I used to be able to rap Straight Outta Compton word for word – what a site. The day after watching this epic masterpiece of cinematography I set off for a 5k run with Chris (ok ok he was doing 15k, whatever) and I ended up running….. 10k! Thanks very much Ice Cube and Eazy E. Stick that in your pipe and smoke it! Longest run since Ironman. Pow. I joked that it was actually more than I ran on the Ironman course seeing as I walked/crawled most of it.

Rapping aside though there is another reason I have chosen today’s title. It is time for some humble pie. Huh? What? Pie? Mmmmmm…. Piiiiiiiie. No no brain shoosh. Humble pie because I can be quite judgemental and opinionated about stuff and in my wise old age I am realising that sometimes you have to try things before assuming they are bullshit. Yes really. How about that for a life lesson. Take Kayla Itsines for example. Firstly, being the type of loser I am I just need to point out you pronounce her surname IT-SEEN-IS and not IT-SIGNS. Moving on. So when all the hoohar started happening around her Instagram account I was in the midst of my “lift weights” and “carbs are the enemy” phase. As a result I dismissed her “eat fruit” and “do 28 minutes of exercise to get abs” programme as a load of bumflefluff. Not a word. I know. It’s good though right?

How wrong was I? Nearly two years after I started training seriously I am now realising that there are loooooooads of ways to be/get in shape. I actually downloaded the “Sweat with Kayla” app to see what all the fuss was about. Upon initial viewing it was snazzy but I still wasn’t convinced it was all THAT. Turns out it probably IS all THAT. Fair enough I can’t see myself ditching my quark and chia seed jam for breakfast and replacing it with 60g of muesli with some milk BUT her workouts are mental. Properly mental. I attempted one last night after firmly deciding I could not be arsed to fight my way to the weights in my local Fitness First. I looked up a full body session and was thrilled to see it only required a skipping rope. I CAN USE MY SKIPPING ROPE! Yeah…. I bought it two years ago, never used it. Skipping rope dusted off I got my Ibiza 2015 spotify playlist fired up and started…

Burpees should be outlawed. Seriously. So should jumping lunges and so should mountain climbers. I wore my Garmin to check my heart rate and it was hovering around 150-176bpm throughout the 28 minutes. To put that into perspective that is similar to my running heart rate. Aka really effing high (I am heavy and running is hard. Shoosh).

28 minutes later and I was lying in a sweaty heap on my living room floor. I lay there for around 10 minutes marvelling at how wrong I had been! The workout was SO hard I couldn’t even complete the mountain climber/push up combos! Damn you Kayla! Why must you prove me wrong in such a vile manner! Urgh. 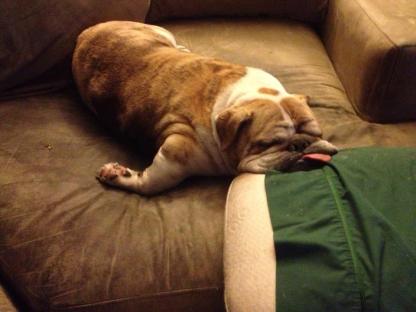 Moral of the story? Don’t rule something out if you haven’t tried it. Don’t like cauliflower? Doesn’t mean you won’t like cauliflower rice. Don’t like the gym? Doesn’t mean you can’t smash a workout at home. I’m not plugging Kayla’s app. You could easily download something similar online but I must admit having it timed and explained right there in front of me on my phone was very helpful!

Oh and another thing…. There could be a whole ton of reasons for not making progress. OR – you might just be eating too much and drinking too much wine. Ha. These were the words of my friend Jack the other day. He has a point. Going out for dinner a dozen times over the past couple of weeks has NOT contributed to getting leaner. Ho hum. Lucky I have managed to kill my training over the past ten days. Back in the pool 3 times a week now and slowly building towards my 10km swim in August. Also starting to enjoy running. Must be something wrong with me. Just need to get my weight training sorted and I am laughing all the way to the beach in Australia in August (YASSSSSSSSSSSSSS). I am investing £65 for an hour with my marvellous friend/PT Andy on Friday and my instructions were “remind me how to lift proper weights and not just fanny around with cables and machines that I wimp out on when I am training by myself”. SO – Friday will be free weights and benches and I’ll be DAMNED if I lose my way again….

Don’t Knock It Until You’ve Tried It